Thanks to Car & Driver for the video.

Very in depth look into the design process within Hyundai North America design studio. A simulation of events that probably mostly occurred, this shows the way designers must internally compete, then swallow their pride and work together on the winning solution. I suspect more designers initially competed, potentially across global Hyundai studios even. Note the chosen design- from quite a loose sketch. The skill of the clay modeller is also very evident in this video.

Couple of interesting links for you here- which both go some way to explain the processes and huge amount of work that goes on in the design studios of car manufacturers, yet is rarely seen by the public. The first link shows a fantastic set of snoop photos of GM design studio 1/4 scale models and 1/1 size models in storage and at design reviews. There are a lot of models on the racks! Just one new model can have many design iterations like these (the picture appears to show designs for a saloon and convertible model), and this is the big secret being revealed here: nobody ever gets a design right first time! Great designers are those that iterate a bad design into a good one…

Here’s a similar link to some Mercedes design scale models, but this time they are even more abstract and don’t actually depict realistic designs. These are early prototypes displaying a thought process and attempts to produce new aesthetic directions for vehicle design. As my mentor at Peugeot smartly told me once, “don’t just start by drawing cars! Draw anything!”.

Thanks to a new baby, and also redecorating a new house- I’ve had very little time to write this blog and even less time to read my long term favourite magazine Car. Tonight I tried to go catch up on reading, and I’m as far behind as the August issue. This brings me to write a post about something in that issue, regarding the leading car designers at this time in 2010. Car Magazine has always been a cut above others, with their inside industry knowledge and contacts but sometimes the design related reporting lets them down. This is not entirely their fault, as the industry still insists on massive variation in publicity in terms of vehicle designers and the internal vehicle design studios. The image of a car company is more important than almost anything else they do and they go to enormous lengths to protect it. Another fact is that a studio’s designers are working on vital products that may not be seen on the road until 6 or 7 years time. This means that headhunting and stealing the staff with that knowledge is very valuable to other studios and very damaging to the studios that lose staff. So, the result is that some studios flatly refuse to acknowledge that anyone besides the chief designer even exists- and therefore every design is attributed to a design chief that may not have put pen to paper for many years. Other studios seem more confident of retaining talent, by simple measures such as paying them enough or keeping them happy! So we rarely see interior, exterior, even colour and trim individuals being named and paraded in PR at car launches. The publicity can also be very selective, with the more design orientated publications being given more information- magazines such as Auto&Design for example. Knowing many designers in the industry, and feeling pride even in seeing their work out there on my local street, I feel quite strongly when I see yet another magazine article reporting that X chief designer actually designed that car. For example, the wonderful new Mercedes SLS exterior was designed by Mark Featherstone. A British born designer, and fellow graduate of Coventry University, Mark went straight from school to work for Mercedes where he has designed the B-Class exterior which earned his stripes as it were- to be let lose on the ultimate Mercedes, the SLS. Mark appeared at the public unveiling of both cars, in 2004 and 2009 respectively, named publicly as the designer, and continues to work for Mercedes to this day. He even featured in a great little PR video driving and giving his wide-eyed Clarkson style verdict on the final production SLS! This makes me feel good, and it makes me like the Merc design department. There are other design studios that are not so transparent in naming any designers other than the top person- or simply make a bit of a mess explaining exactly how a car is even designed. The result is that CAR magazine’s list of the top 30 designers, with notes on the actual cars designed by them- not just the studios they run, is plain wrong in places. For example the Mercedes chief, Gorden Wagener is credited with the SLS, but the text is more generous to our Mark by saying Gorden “championed” the SLS, rather than created it. The issue gets much more complicated when the journalists really don’t understand the difference between leading a design strategy across various studios, leading a certain brand, leading a single project or actually getting the markers and clay out and styling a vehicle. A great example from the list is a fantastic award winning concept car from 2006- the Citroen C-Metisse. I also personally know both designers involved, the painfully talented Vincent Grit on exterior duties, and the very good friend and superb artist Steven Platt creating the interior design. Both of these designers were publicly named as the creators of this vehicle on it’s release, there was a photo of them both stood next to that car (which was captioned with their names in the relevant article in 2006). I have included a signed sketch by Steven here. 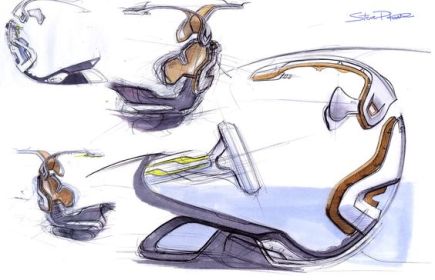 Now in the 2010 CAR article, recently promoted chief designer at Peugeot, Giles Vidal is credited with designing the C-Metisse. The article actually points out Vidal was head of concepts at PSA, so maybe we should be lenient, but it once again might seem to the average reader that the C-Metisse was such great work by him that it earned promotion. This is true in a sense- that he made the decision to produce this concept and that decision proved to be popular once revealed to the public. Perhaps something of a design industry joke, is just how many people claim to have designed the original Audi TT, this latest magazine article credits Peter Schreyer, Freeman Thomas, but not as has previously been reported, J Mays. The list of Audi TT designers could be longer, and will we ever know who actually sketched out that shape?

The reality would be great to know from all these studios, just how much input do people such as Giles have into that design? I hear to varying degrees the amount that a designer is “in charge” of their own design once it has the green light for either a concept or production. This is also the standard practise within studios, to let all designers compete, then once a single design has “won” the designer responsible effectively becomes chief on that one vehicle, seeing it through right to the final stage in every detail. So a studio chief simply picks a winner- like early auditions for X-factor? When I was an intern at Peugeot, the Peugeot family vetted new designs, and if Mr Peugeot’s wife didn’t like your design, then it probably wasn’t going into production I’m afraid. Also, if a designer simply stuck the cat-eye headlamp graphic on almost any shape- that also was favoured by the chief designer over any other more aesthetically pleasing designs. Does this kind of selection require design ability, aesthetic judgement, or just a grasp of office politics? We could say generously that it requires all 3 skills, and is a damned difficult role to play in the process. We could also say the opposite….