This is not a very comprehensive review of the year, I’d recommend the Car Design Yearbook if you like that sort of annual information. 2008 did see me start this blog though, so I will make an effort to name some of the best and worst car design of 2008. There were also some vehicles that cause me to sit on the fence a little- undecided as yet on their success or failure.

In the autumn Paris was a show highlight with the French industry being resurgent. Citroen deserve special mention in 2008- and not just because designs by my friends were launched! They created a few significant concept cars this year, including one close to my own work interests- the GT design developed for the Gran Turismo PlayStation game, and also continued to follow their own unusual path for production designs. Renault produced a good concept or two, but their production cars were a little lacking, barring perhaps the 3-door Megane. Mazda continued to produce more concepts with the same “flow” design language they started a couple of years ago. The ultimate of these was the Furai.

Similar to the Citroen GT, this was a no-brainer for impressive proportions and drama due to its mid-engined supercar format. The Mazda is notable mostly for its sliced surfaces and curvy but hard-edged bodywork. It also has one of my favourite new technical elements, the negative pressure engine air intake. Instead of the usual roof scoop for the airbox of this mid-engined design, the Furai uses a central vane that draws air down along either side like a sharks fin. It doesn’t move styling forward, but it simply looks great. 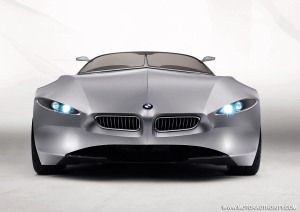 BMW revealed a concept car this year which I believe has been created quite a few years ago, but was only shown internally. It was revealed to the public in 2008, and therefore is a close runner up for best concept. This sounds strange, but the design was very ahead of its time and has served as inspiration for BMW’s current flame surfacing design language. That design language has been much copied, so the original concept was clearly kept to inspire their own designers without being shown to rivals. The GINA concept is stunning, with ground breaking use of flexible fabric skin so the car can physically change shape. It literally has the “tension” that I’ve talked about elsewhere in this blog, by the fact the skin is fabric stretched taught across a frame. The design inspired the current Z4 production car, which gives us a clue to its age.

An overlooked concept this year was the Pininfarina Sintesi. This was a curious design that was at once classical with lovely old style Pininfarina curves, but at the same time radical and modern in its architecture, engineering and proportions- brilliant, if a little odd looking.

Pininfarina also delivered my personal favourite production car of the year- although it won’t be on sale until 2010. This car will actually be sold directly by Pininfarina themselves, and is an electric vehicle 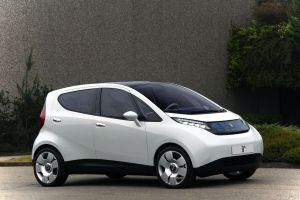 called the B0. It not only looks fantastic, it has zero emissions and even has solar panels in the roof.

Other highlights of this year in production cars were the Lotus Evora, a simply gorgeous car that at once looks new but also as if it has evolved over years of design tweaks (like a 911 that has just appeared suddenly!). The Nissan GT-R was finally released globally and dominated every performance car test, thoroughly beating cars costing twice the price. Porsche were alarmed enough to publicly complain to Nissan that they couldn’t replicate a claimed Nurburgring lap time, using the GT-R they purchased for evaluation. A great piece of PR for NIssan, considering Porsche were worried enough to buy a GT-R and try! Nissan replied by politely offering to send their own test driver to teach Porsche how to drive a GT-R. The car is utterly fantastic, and unique in its design. Blending the roots of 2 door saloon Skyline GT-R, with a more purposeful aerodynamic coupe roofline. The roofline even has a sharp dividing line- literally showing the two genres that have been fused together. Another great example of Japanese design appeared this year from Toyota. The Toyota IQ is quite obviously inspired by the Smart car, even the name tells us this, but Toyota have done that very Japanese thing of improving and re-engineering the idea to a very practical solution. The IQ can actually seat 4 adults, 3 very comfortably, or two plus luggage. In another national stereotype, Toyota created this space by reducing the size of every component in the car- a bit like a cool Sony laptop. Honda meanwhile decided to trump Toyota’s half-hearted hybrid technology by releasing a production design that is the most significant change in car engineering for 100years. The FCX Clarity is a hydrogen powered fuel-cell car, on sale, now. A stunning achievement (although slightly cheating, as Honda subsidises each car by perhaps $100k’s) and the future of the car industry for sure, with its only emissions being pure clean water!

In the rest of the world, things were decidedly retro. Fiat launched the insanely cute 500, which is possibly the bargain of the years new cars. The Abarth version is also perfectly judged in its additional sports bodykit. The US car industry is on the brink of total failure- which frankly they almost deserve, thanks to shoddy products. That would be a shame of course because we’d be deprived of amazingly macho and pointless vehicles such as the new Camaro and new Dodge Challenger. The Chevy Camaro being my own personal favourite for its much more progressive styling, but sadly it won’t be on sale until 2010! Lets hope they’re still around to sell it… both cars show that the US really know how to style great looking cars.

Last but not least a special mention for a design that is certainly not retro, nor is it in any way conventional. It is barely even a proper car.. but in terms of design the KTM X-Bow is truly exceptional. I really love the design of this car, it is engineering laid bare. With that perfect amount of styling quite literally laid over the top in the form of aerodynamic fairings that only a motorcycle design studio could pull off so perfectly. There are features- particularly in the minimal interior, that have been played with on concept cars for the best part of 20 years and finally it takes a motorcycle manufacturer to be brave enough to put them into production. Water resistant removable instrument “computer” pod anyone? Yes, yes please!

Next I’ll be writing a review of some of the WORST designs of 2008.. should be fun. I’ll leave you with a gallery of the cars mentioned here.

This site uses Akismet to reduce spam. Learn how your comment data is processed.